Since the iPhone 5c, Apple’s approach to making a more affordable iPhone has been to stuff premium processors into cases belonging to older models. With the third generation of the iPhone SE, the company has stuck to that strategy. With its home button, top and bottom bezels and rounded corners, the new iPhone SE is nearly identical to the 2020 model, at least on the outside. Inside, this year’s version packs an A15 Bionic chip and a 5G radio, promising a serious speed boost. Apple is also touting longer battery life and improved durability on this year’s model, which will set you back a modest $429. That’s $30 more than the last iPhone SE, but still cheaper than the $450 Pixel 5a. If you want a simple iPhone that runs like new, and you don’t mind the dated design and single rear camera, the iPhone SE might fit the bill.

At a time when basically all smartphones have done away with home buttons, this year’s iPhone SE feels anachronistic. Its home button sits in a bezel below the screen, while the top bezel hides the device’s front camera. If you’re familiar with the last iPhone SE, then you’ll know what to expect: This year’s model is so similar that I legit have trouble telling them apart. The only way I know which one I’m holding is if I scrutinize the phone’s rear casing under a fluorescent light. The review unit Apple sent this year is a dark blue, while the 2020 iPhone SE in my possession is black. Oh, and, according to the specs sheets, the new SE is a whole four grams lighter. Considering the earlier model already looked outdated, the latest iPhone feels very much stuck in the past. 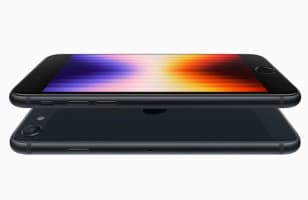 Still, in spite of its stodgy design, I like the way the SE feels. It’s very similar to the Pixel 3: slim, slightly curved and solidly built. The iPhone 13 mini is a little smaller and thicker, with flatter edges and a notch at the top of its 5.4-inch screen that houses its front camera. If you hate notches but for some reason don’t mind bezels, the iPhone SE’s retro look is for you.

More importantly, Apple says the iPhone SE is covered in the same hardy glass used on the iPhone 13. While I have yet to drop my review unit, knowing that this will be more scratch resistant offers some peace of mind. I don’t use a case with the iPhone 13, and it’s still pristine, despite having been tossed into bags with keys and other sharp objects. It does pick up fingerprints and smudges very easily, though. It’s also nice that the iPhone SE is rated IP67 for dust and water resistance — something the Galaxy A52 5G and the Pixel 5a also offer.

Like many phones from 2017, this year’s iPhone SE sports a 4.7-inch LCD screen with 1,334 x 750 resolution. Honestly, those specs are downright tragic for 2022 standards, by which OLEDs have become commonplace. Don’t even get me started on the refresh rate. The Galaxy A52 has a 6.5-inch Super AMOLED running at 120Hz, while the Pixel 5a’s OLED panel at least refreshes at 90Hz.

It’s not going to wow you, but the iPhone SE’s display is serviceable. I watched the beginning of The Problem with Jon Stewart on the TV+ app, and though everything looked somewhat muted compared to the OLEDs I’m used to, the show still looked fine. You’ll definitely want to push the screen to max brightness to watch videos outdoors in the sun, though.

Despite its small size, the iPhone SE’s speakers are surprisingly loud. I enjoyed listening to the tap-dancing sequence in a video of a performance of Anything Goes, as well as Sutton Foster’s ample vocals.

The iPhone SE’s biggest disadvantage in the mid-range space is its cameras. It has just one rear 12-megapixel sensor with an f/1.8 aperture, while most of the competition come with at least two, making them more versatile shooting rigs.

But if you’re content with a solo camera, the iPhone SE 2022 will suffice. It takes surprisingly sharp and colorful photos that are on par with the iPhone 13 mini’s. Ornaments on the red brick facade of a local building looked equally crisp when shot on either phone, even when I zoomed all the way in. It’s clear that with the A15 Bionic and processing upgrades like Smart HDR 4, Apple’s been able to make the iPhone SE’s camera perform as well as the main sensor on its flagship.

The Pixel 5a generally produced darker images with cooler, more neutral tones in its images, and though I’m not a fan of Apple’s default treatment, which has a slightly yellowish tinge, you do have the ability to change that. The company introduced Photographic Styles with the iPhone 13 series, which lets you adjust preset profiles for contrast and tone. Every picture you capture will use those settings (until you pick a different style). Happily, the new iPhone SE also offers Photographic Styles, so you can exercise a bit more control over how your shots turn out.

I was surprised by how similar the iPhone SE’s pictures were to the iPhone 13 mini’s. From landscapes to portraits of my coworkers, there were barely any differences in the shots taken by the two phones. The Pixel 5a was better at isolating our video producer’s spiky hair from the background than either iPhone, but all three devices performed admirably.

Our main complaint about the last iPhone SE’s camera was that there was no Night mode. This year’s model still doesn’t offer one, and though some of the pictures I took of buildings surrounded by mist one night came out muddy, others came out bright and sharp. It’s likely that my shivering hands contributed to the blur, but in general, Google retains an advantage in low light.

Up front, the iPhone SE’s 7-MP camera also falls short of the competition on paper, but in reality it performed just as well as the Pixel 5a and iPhone 13 mini. It struggled to keep up in dim environments, though; I observed a more noticeable difference in the selfies I shot inside a stationary car one night. The iPhone SE’s photos weren’t as clean as the others, but they were still good enough to share.

Synthetic benchmarks don’t paint the most complete picture of a phone’s performance, but in a pinch they’re a good point of reference. The iPhone SE’s Geekbench 5 scores blew away the Galaxy S22 series, and even came close to matching the iPhone 13 Pro. That makes sense, given Apple equipped its budget phone with the same powerful A15 Bionic chip found in its flagship series.

In everyday use, the A15 Bionic was powerful enough for most of my tasks, including editing and exporting a minute-long video in iMovie and using the camera’s Live Text feature to scan product labels around me. I did notice some delays while setting up the phone, with a noticeable pause from when I tapped “Continue” to when the next page came up. I also couldn’t screen record while using SharePlay on a FaceTime video call to show my home page to my colleague which, according to an alert, was a buffering issue. Apple also doesn’t allow you to record your screen while SharePlaying, which I wish was what the notification explained instead. But everything else ran smoothly.

The iPhone SE did get a little warm while I ran tests and used the camera’s Live Text feature to scan addresses on a bottle and look them up in Maps. Thankfully, it cooled back down quickly.

As someone who’s grown accustomed to gesture-based navigation, I needed to reacquaint myself with using a home key. It doesn’t physically depress; like on the previous iPhone SE this is a touch sensor that vibrates in response when you push it. That said, as strange as it felt to navigate iOS with a home button, I did welcome the convenience of Touch ID.

Unlocking the phone was a breeze, too, and if you’re familiar with the last iPhone SE’s sensor you’ll be used to this, especially since the hardware is exactly the same. In fact, if you’ve never known life without the button below the screen and don’t want to give it up, this is the only modern phone around with it.